Photovoltaic modules as solar powerThe service life of the core components in the system has a certain relationship with the lamination process, but it also depends on the performance of the raw materials used. The most critical one is the photovoltaic backplane. As the outermost layer of the module, the photovoltaic backplane is in direct contact with the external environment, and withstands outdoor wind, rain, exposure, corrosion and pollution; it also contacts the internal packaging materials to prevent external leakage and block water vapor internally . 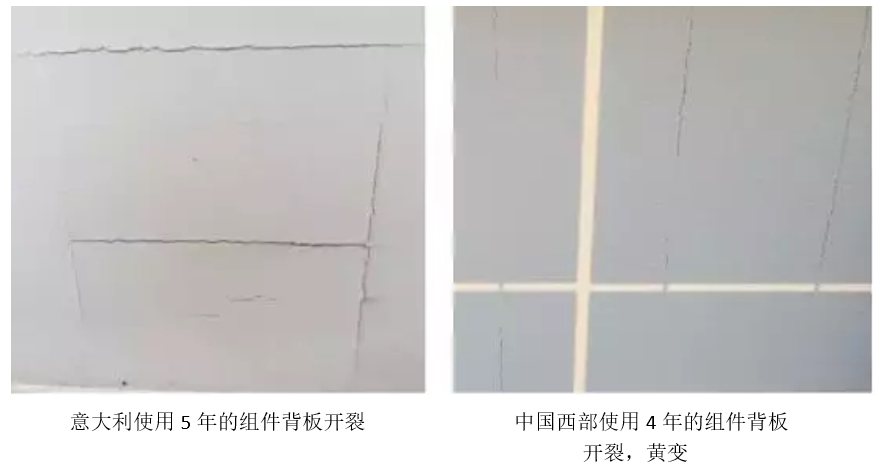 In response to backplane cracking, researchers have extracted components from all over the world that have cracked backplanes after 3-6 years of use, and passed a series of chemical and mechanical tests. The results showed that the most vulnerable area occurred on the inner side of the backplane, rather than the outer layer exposed to the air. In addition, it was found that most of the cracks occurred between the gaps of the battery pieces.

During the use of photovoltaic modules, the encapsulating material EVA (ethylene vinyl acetate) will undergo a hydrolysis reaction at a certain temperature under the action of water vapor (the photovoltaic backplane has a certain water permeability) and sunlight (including ultraviolet light). Acetic acid is produced, and the contact of the backsheet material with acetic acid will cause degradation and cracking. The EVA encapsulating material on the back of the battery receives less light, so there is less EVA hydrolysis relative to the battery gap. In short, the main reason for the cracking of the backplane is the hydrolysis of EVA to produce acetic acid. There are more cracks in the gap between the cells because the EVA in the gap is exposed to stronger light. 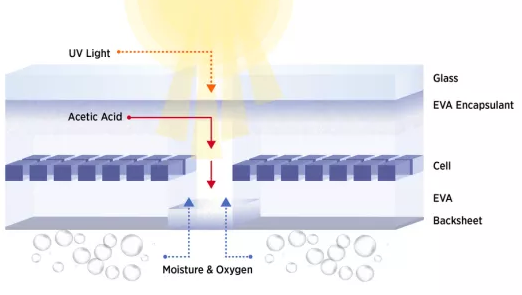 From the above analysis results, the conditions required for EVA hydrolysis are: light, water vapor and temperature, all of which are indispensable. However, among the most commonly used testing standards for photovoltaic products, IEC61215 and IEC61730, there are only separate ultraviolet UV aging tests and separate high temperature and high humidity DH series tests. Therefore, conventional ultraviolet UV aging tests and high temperature and high humidity DH tests cannot be simulated. The effect of EVA hydrolysis reaction on the overall life of the module. In this context, Huayang Testing took the lead in introducing the UV+DH composite aging environmental chamber, which is one of the only domestic institutions that can achieve composite testing. The composite test chamber can effectively verify the components and materials (including the back Board) the ability to resist various aging properties in a complex test environment.

Fourth, what is the UV+DH composite aging environment box

The UV+DH composite aging environment box combines two independent aging tests (UV+DH) to realize the simultaneous operation of two test items (UV+DH), that is, the UV aging test is performed in a high temperature and high humidity environment. It can be widely used for weather resistance testing of photovoltaic connectors, photovoltaic backplanes, and photovoltaic modules (small size). Huayang Testing's existing composite aging environmental chamber has an effective area of 1m×1m, and the ultraviolet radiation intensity is 150~250W/m². The total radiation can be set in the range of 15kWh/m²~120kWh/m², and the temperature can reach 95℃, the humidity can be as high as 95%RH. The total amount of ultraviolet radiation and the time of high temperature and high humidity environment can be adjusted according to needs. 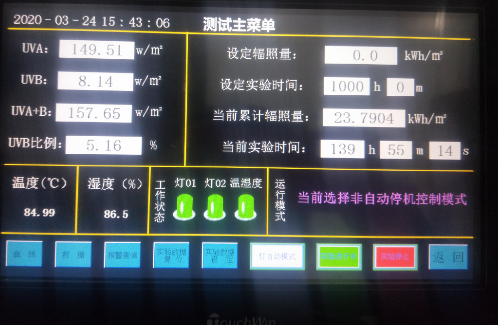 According to the test standards and test experience of component materials, Huayang Testing recommends the test parameters of the composite aging test as follows: 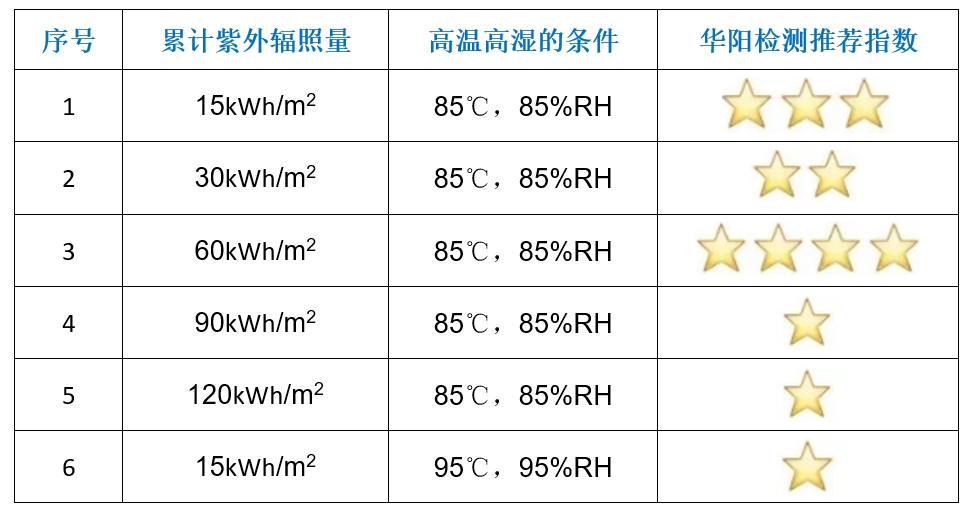 Through the above test, the quality of parts and materials can be evaluated in a short time, which is a fast and efficient screening method. Huayang Inspection is using the DH+UV composite aging box to carry out the ultraviolet high temperature and high humidity test of the connector material for the customer, as shown in the figure below (setting parameters: temperature is 85℃, humidity is 85%RH, irradiation is 120kWh/ m², the test time is 1000h). 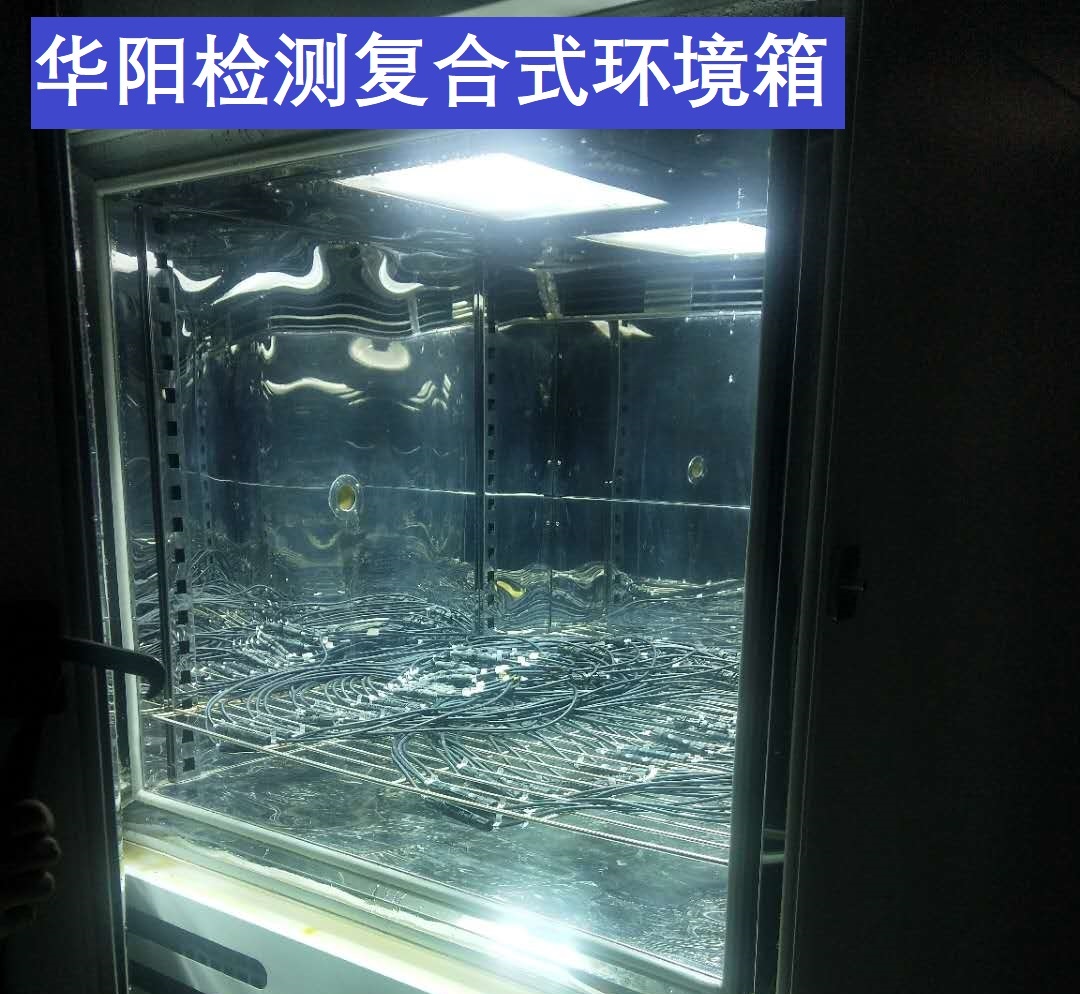 So far, more and more material manufacturers have begun to pay attention to and carry out the testing of composite test items. It is believed that in the near future, composite aging testing will be incorporated into routine testing items. Huayang Testing will always pay attention to the development trend of the photovoltaic industry, and jointly develop new testing equipment with testing equipment manufacturers to provide the most reliable service for the verification of product quality in the photovoltaic industry.